Usher took major heat earlier this year after being accused of throwing fake money at real strippers — but when you see this … his so-called “bucks” are A-OK in context.

Check out these videos taken from one of Usher’s Vegas residency shows from this past weekend — during which an exotic dancer took the stage (and the entire building) by storm after performing a pole routine during Mr. Raymond’s “Bad Girl” … with a club-like set in tow.

this is her show. period. pic.twitter.com/V5981uN2Vv

The woman’s name is Isis (the Goddess) … and she’s half naked on the pole, doing all sorts of flips and tricks in the air, while also twerking and knocking her boots ON BEAT at the same time — this while Usher and the rest of his fellow performers look on and throw some kinda green her way. Some have speculated that, yes, they might be Ush bucks.

It’s all part of the performance for that track, it seems, with the stage design made to be part of a larger set piece highlighting the “Bad Girl” narrative Usher’s singing about. So, in this setting — where the dancing isn’t “real,” per se — it’s NBD to throw his phony cash. Right???

WRONG!!! Or so it seems, anyway, based on some Twitter users’ reaction to the clip — which has since gone viral — who *seem* to actually be upset that this gal might’ve been getting funny money thrown at her instead of real bills … even though she’s in on the show.

Whether the so-called outrage over this is sincere or not — we can easily weigh in and say, the idea of being mad that this dancer wasn’t collecting real greenbacks during the show is utterly outrageous. Because, frankly, she’s probably collecting way more for her role BTS. 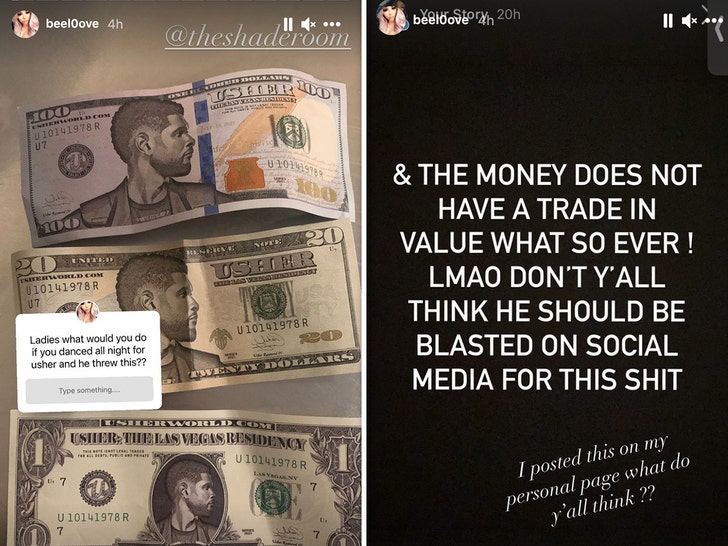 Of course, it’s quite possible people are simply giving Usher a hard time (in jest) because of the brief controversy from a few months ago, where a stripper who wasn’t part of his show claimed he’d thrown Ush bucks her way instead of real dough … which he refuted.

Anyway, the dude’s residency continues to be a smashing success — the place is looking packed just about every time he goes on, and celebs have been making a point to come by and catch this one in person. And, with show-stopping numbers like this … you can see why!

Apple In Major Bidding War For Next Jennifer Lawrence Movie